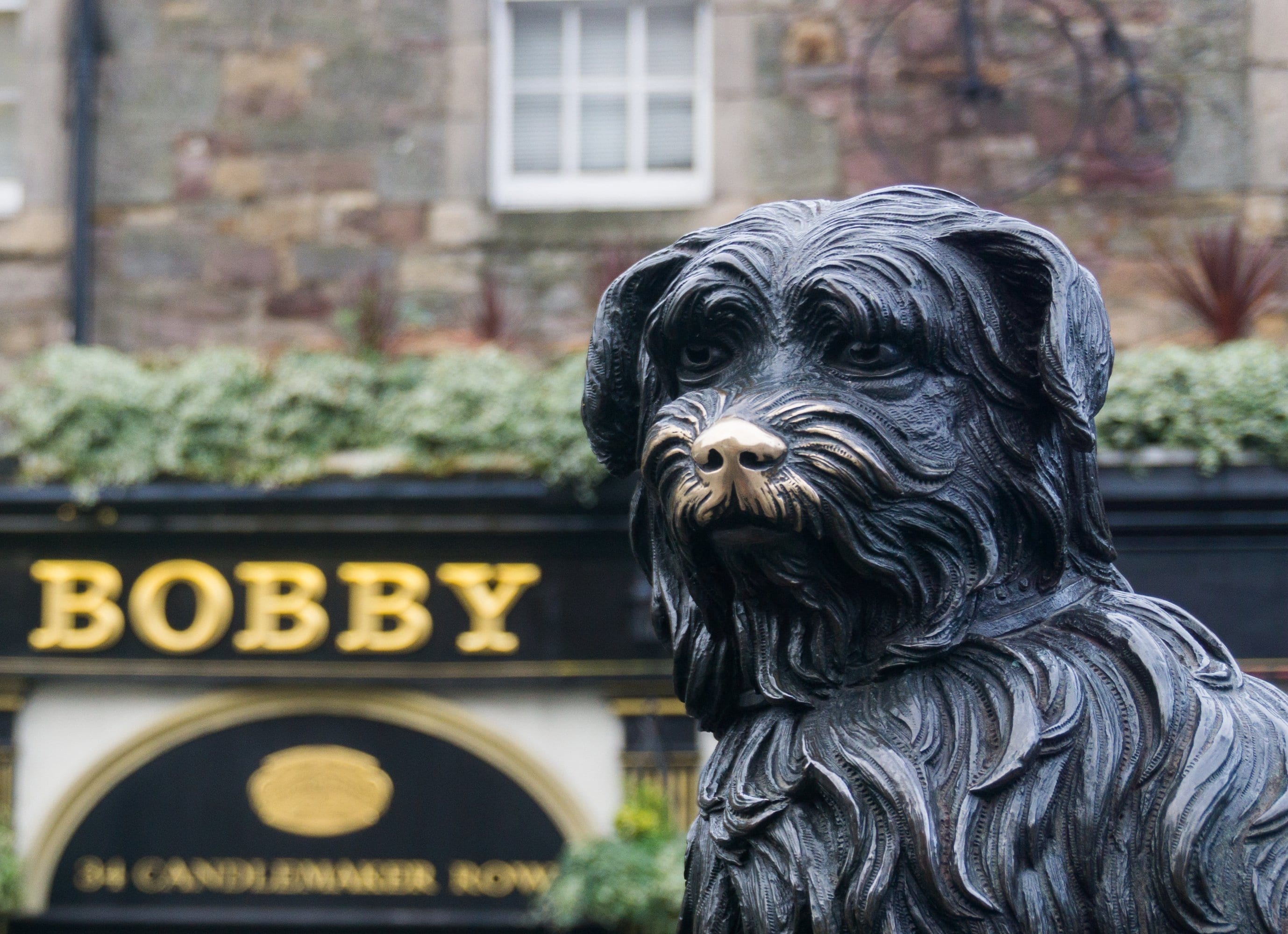 Ask any “Edinburger” and they will be able to tell you the tale of Greyfriars Bobby. This hometown hero is the capital’s most popular tourist attraction and people will travel from all over the world just to get a glimpse of this world-famous statue.

We delve deep into the story of Greyfriars Bobby and Edinburgh’s love affair with this legendary animal below.

The story of Greyfriars Bobby 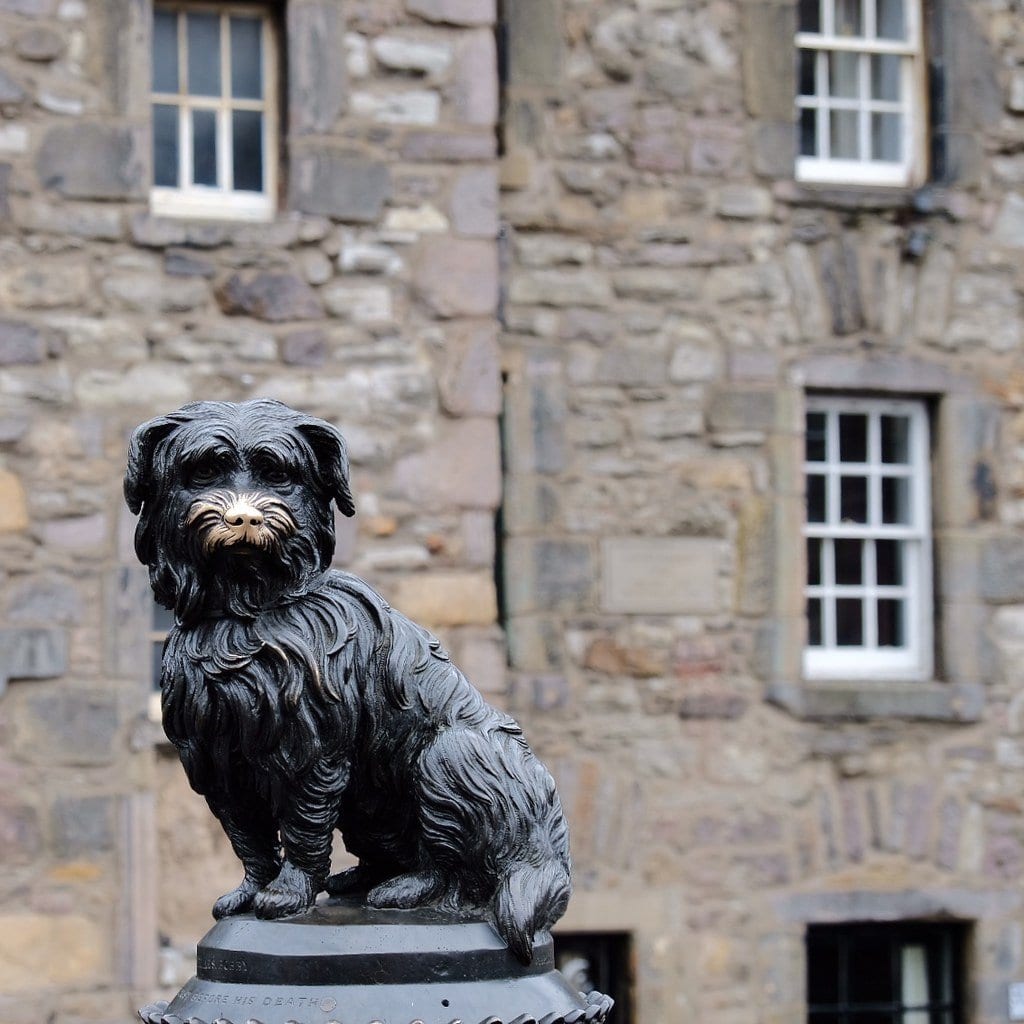 The story if Greyfriars Bobby begins in 1850 when a gardener called John Gray arrived in the Scottish capital, Edinburgh. Unfortunately, John was unable to find work as a gardener in Edinburgh, so he decided to take on work with the local police force as a night watchman.


Bobby a distinctive black Skye Terrier, became a ‘watchdog’. One that the people of the town would come to know and love as he plodded about the town with his partner John. They were not only partners, but they were also friends and John was never seen without Bobby when he was patrolling the cobbled streets of Edinburgh.


After working for many years, John’s health started to deteriorate and he was treated by the Police Surgeon for tuberculosis. John never won the battle and he died of the disease on the 15th February 1858.

When he was buried at Greyfriars Kirkyard in Edinburgh, Bobby refused to leave his master’s grave. This went on for weeks, months and years even in the worst weather conditions.

Even when the groundsmen of Greyfriars Kinyard tried to remove bobby from the grounds, he still managed to returns. Impressed by his loyalty to his master, they made a shelter for the dog, placing sacking beneath two table stones beside John Gray’s grave.


At the time, Bobby’s fame spread throughout the city and crowds began to gather at the entrance of the Greyfriars Kirkyard to get a glimpse of this amazing animal. Like clockwork, at the one o’clock gun Bobby would leave the grave for his midday meal.

The people of Edinburgh grew fond of the dog and in 1867 when a new bye-law was passed that required all dogs to be licensed in the city or they would be destroyed, they knew that something has to be done to keep Bobby safe.

The Lord Provost of Edinburgh during that period, Sir William Chambers was a secret fan of this hometown hero and paid for Bobby’s license. He presented him with a collar in person with a brass inscription

This license can be now been seen at the Museum of Edinburgh.


Until Bobby’s death in 1872, the people of Edinburgh looked after this wonderful animal as he guarded the grave of his dead master.

You’ll be pleased to learn that they were together until the very end.

This story is heard by millions of people every year and many travel to Edinburgh just to visit the place where it first began. 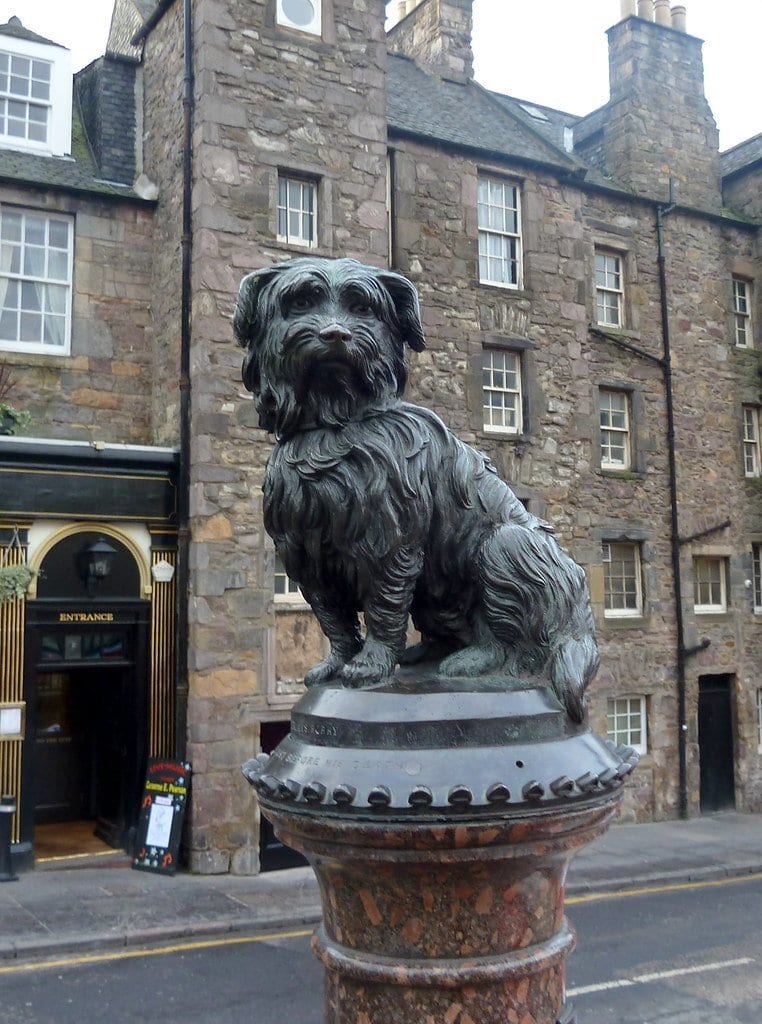 The statue was commissioned by Baroness Angelia Georgina Burdett-Coutts, President of the Ladies Committee of the RSPCA. The Baroness was so touched by the story and Bobby’s devotion to John that she requested permission from the City Council to build a memorial for this amazing animal.

On this iconic statue and memorial it reads:

“A tribute to the affectionate fidelity of Greyfriars Bobby. In 1858 this faithful dog followed the remains of his master to Greyfriars Churchyard and lingered near the spot until his death in 1872.”


It was created by the artist William Brodie in 1872 has stood the test of time and will continue to for many, many more years.

If you are planning a visit to the beautiful city of Edinburgh, this is a must-see attraction.

You will find Greyfriars Bobby at Greyfriars Kirkyard. The museum here is open during the summer months and tourists can visit to hear more stories about this world-famous dog.

There is also the Greyfriars Bobby’s Bar in Candlemaker Row which is next to the statue – one of the most photographed pubs in Scotland. It’s is no surprise that this cosy waterhole is both human and dog-friendly pub and many of the locals bring their proud pooch along for a pint! 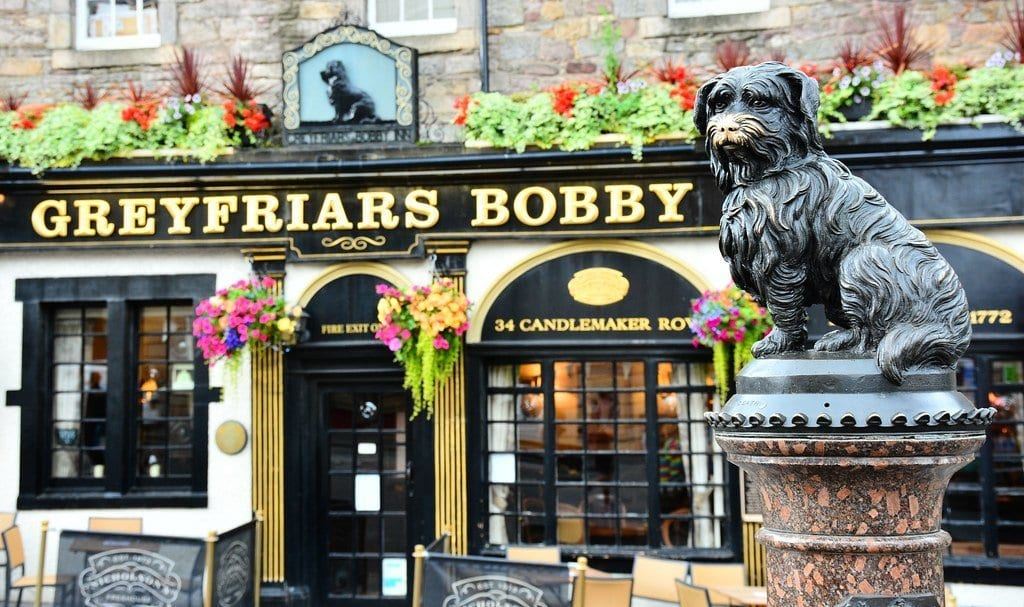 Over the years, Greyfriars Bobby’s black nose has started to become shiny from all the tourists rubbing the nose of the legendary statue. Many believe that it will bring them good luck in the future.


Edinburgh council have discouraged this as the constant touching has damaged the underlying brass metal. Bobby’s nose and even parts of his chest are now shiny.


Although many locals and tourist believe in this tradition. A spokeswoman for the council has said:

“While he enjoys attention from visitors and loves to have his photo taken, Bobby gets distressed when people rub his nose.”


So if you do decide to visit this unique landmark in Edinburgh, take lots of pictures but be gentle with Bobby. 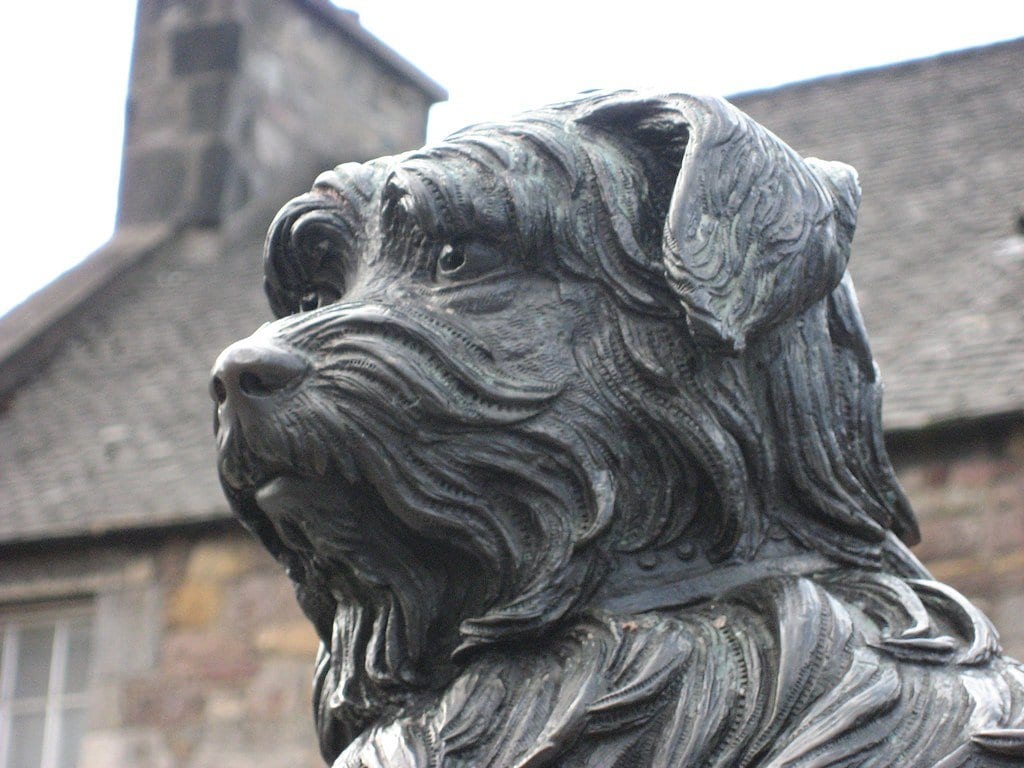 Tours at Greyfriars run by the Kirkyard are on from April-October, they take place every Thursday at 11am, unless the venue is closed for a private booking.

Prices start at £8 for adults, and £6 for children. Children under the age of 5yrs go free (but a place must be reserved).  For groups of over 15 people, the charge is £6 for adults and £4 for children.

This location is not only home to Bobby, but it was once the supposed inspiration for many Potter characters as JK Rowling would visit the site often while she was writing the series.

Over the past 25+ years Graham has travelled the length and breadth of the country on camping overnighters, hillwalking adventures, road trips and random getaways. During this time he has accumulated an intimate knowledge of Scotland.

If you are visiting South Ayrshire during your next Scottish adventure stop off at this charming seaside town.  Troon is well known for its spotless… 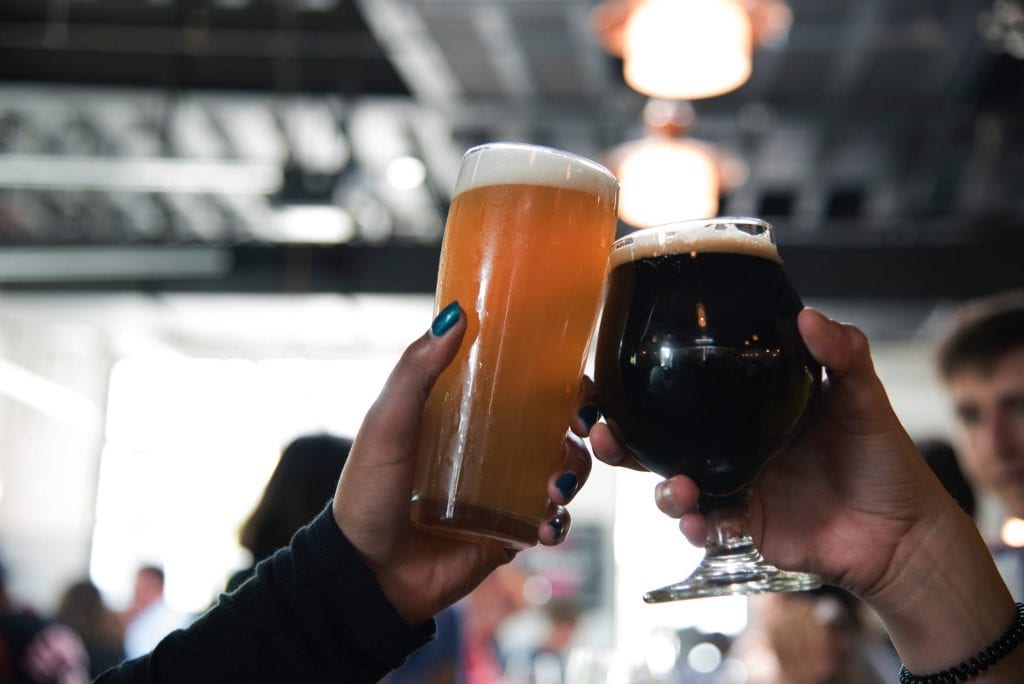 Read our dictionary below to begin understanding Scottish sayings. Scottish slang sayings can be difficult to understand but practice makes perfect. Granted, a lot of…